About GWR Instruments, Inc. and the Superconducting Gravimeter 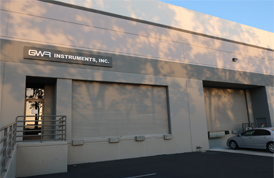 The Superconducting Gravimeter (SG) was invented by J. Goodkind and W. Prothero at the University of California, San Diego in the mid 1960’s. In 1979, GWR Instruments was formed as a partnership by J. Goodkind, R. J. Warburton and R. C. Reineman to manufacture SGs for European customers. As demand increased, the company was incorporated in 1992 and is presently owned by Richard Warburton, Richard Reineman and Eric Brinton all of whom take great pride in their long term relationships with customers.

In the early years, the need to purchase, transport and transfer liquid helium restricted SG operation to observatory buildings. Fortunately, improved 4-Kelvin refrigeration systems now liquefy and recycle liquid helium in the dewar which eliminated this need; and as a result SGs can now operate anywhere in the world where enough power (1.5 kW) is available to operate the refrigeration system.

From 2003 to 2012, GWR exclusively sold the GWR Observatory Superconducting Gravimeter (OSG ) which - as with earlier SGs - was used mainly in about 30 observatories throughout the world as part of the Global Geodynamics Project1, 2. The GWR OSG has a stability approaching a few µGal/year and provides the lowest noise continuous measurement of long term gravity signals over periods of years to decades. The OSG also provides unprecedented nano-Gal resolution across a broad frequency band ranging from tidal periods (days) to long period seismic (1000 s) signals. 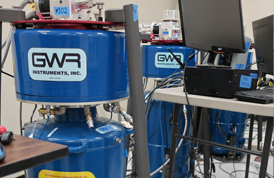 To encourage new applications that include volcanoes, geothermal and oil reservoirs, and hydrological applications, GWR Instruments introduced the new iGrav® SG in 2010. This new simplified system maintains the same operating features as the traditional OSG but is built into one stand-alone "package". The complete ½ sized Dewar houses all the redesigned electronics and data system within the top portion of the Dewar. The refrigeration system can cool the sensor from room temperature and till the Dewar with liquid helium in less than 10 days. The modular design and modernized electronics simplifies setup and operation and allow easier relocation to new sites.

In 2014 GWR started to manufacture remote field station enclosures that provide all the infrastructure need to operate the iGrav®. These enclosures include air conditioning, power management, lightening protection and integration with GPS and are suitable for rapid deployment in rugged field environments.